Yesterday I was out of bed by 7 o’clock and by noon I had my hand in a water-filled hole in the yard, trying to figure out how deep it goes and mentally calculating how many pounds of river pebbles one could reasonably fit into said hole.

Obviously, some stuff happened in between.

We got over 54 inches of snow this winter. This was some of it: 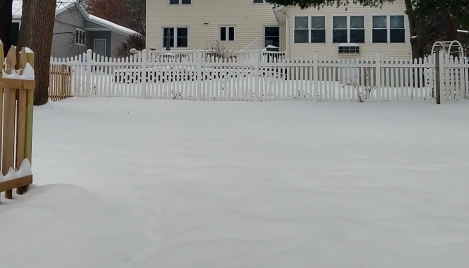 Starting around the middle of the month we started getting some more sun (yay!) which melted the snow (yay!) and created a marsh of our backyard which sent water seeping into our basement (boo). But as of today almost all of the snow is gone and the ground has thawed, and so we figured it might be a good day to start work on the yard, including the plot where we want to put a vegetable garden.

The back corner of our yard is a perfect place for a garden. It gets a ton of sun, as it’s one of two patches that isn’t nearly completely shaded by trees. We have a lot of trees, y’all. Including one that is definitely threatening to lose an enormous limb and take out our neighbor’s fence. We’re getting it trimmed and in the meantime I try not to go to that side of the yard.

Anyway, the previous owners of the house had also used this corner for a garden, though theirs was the flower and plant variety, which I doubt were edible (though you never know). Everything died off under all the snow and in the -60 degree wind-chill winter we had (did I mentioned we just moved from Georgia, where “cold” is, like, 40 degrees? Where the merest whispered rumor of frozen precipitation shuts the city of Atlanta down?) I figured I wouldn’t have to worry too much about the plants come spring.

Y’all. These river pebbles. There’s millions of them. Probably.

I was ripping up some roots and clearing out twigs and pine needles and such, and I came across a section of river pebbles. I shoveled this small layer out of the way by hand. Then found more. And then found even more.

And the hole kept getting deeper and wider and it filled with water because, you know, almost five feet of snow melting has to go somewhere, and apparently that somewhere is into my boots. Soon I am kneeling in this mud (which is slowly swallowing me) forearm-deep in this hole, feeling nothing but river pebbles, and thinking to myself, Huh. So this is home ownership.

I have since learned there’s such a thing as river pebble mulch, which may explain the three-foot oval patch of it in this garden, going at least two feet into the ground.

Then again it might not explain anything. Perhaps there is some kind of very tiny underground imp or sprite or troll whose natural habitat happens to be river pebbles. If that’s the case, I’m so sorry, teeny tiny mythological creature. I need a place to put the broccoli plants.

Bryce is sorting out how to deal with the garden and with the backyard in general. Bryce is good at sorting things out because he does Lots of Research and Remains Calm. These get capitalized because they are good qualities and because I am only OK at the first one and not so good at the second one.

While Bryce figures out game plans for life problems, I cook.

We devoured these stuffed shells. I mean, I did move my body weight in river pebbles today, and I don’t know where that falls on the exercise scale, but I know it earned me a plate full of these and the last of the banana honey cake from a few days ago.

The great thing about pasta shells is you can stuff them with just about anything. I say just about because, for instance, a cotton candy stuffed pasta shell would likely be gross. Unless you are Buddy the Elf or a carb-lovin’ unicorn.

We stuffed ours with ricotta, kale, and salami. We used the salami because we had some leftover from these sliders. I also added in red pepper flakes for some extra heat. You can omit these or scale these down or up. Ours had a mild kick.

It’s a little twist on the more standard spinach and ricotta mixture, because we had kale already. I like that the kale maintains some bite through the cooking process, but you could easily sub in spinach. Just wilt it in at the very end before combining the garlic-salami-kale mixture and the ricotta.

Kale & Ricotta Stuffed Shells
adapted from the recipe on the back of the Hy-Vee Jumbo Shells Box because it’s been that kind of day
serves 5-6, depending on serving size — yields approximately 32 shells

Follow box directions for pasta. For me, this meant bringing 3 quarts of water to a boil with a sprinkling of salt. When you add the jumbo shells, add them a few at a time. Make sure to stir frequently to keep them from sticking (I lost a few shells because they stuck and tore).

While the water is coming to a boil, preheat the oven to 375 degrees. Then heat a drizzle of olive oil in a pan over medium heat. Mince garlic cloves (first smash them with the flat of your blade, then peel them and cut off the hard end, then mince). Dice onion. When the pan is hot, add onion, stirring until translucent, then add in garlic. Stir in salami and kale, and cook until the kale has wilted.

In a bowl, combine ricotta, 3/4 cup mozzarella cheese, and 1 egg. Sprinkle in basil, oregano, and red pepper flakes. Once the hot mixture has cooked, stir that into the cheese mixture.

Once shells have cooked to preferred tenderness, drain them and rinse them with warm water. This will cool them down enough to handle.

In a large casserole dish, coat the bottom with pasta sauce. Fill shells one at a time and line them in the dish. With the amount of filling I put in each, I got 32 shells (and had some cooked shells left over). Once all the shells are filled, cover them with the rest of the pasta sauce.

Like when making a lasagna, make sure there aren’t any shells that aren’t covered in sauce. These may get tough and dry in the oven.

After this, remove the dish from the oven and let rest for at least 5 minutes. Serve.

Elsewhere on the Interwebs