I have never been one for April Fools’ Day because I’m not big on anything for which Wikipedia, a site for which anyone can provide information, has this to say: “Little is known about the origins of this tradition.”

I’ve not witnessed any impressive practical jokes, either. For instance, once in high school some kids put chocolate chips in the toilets to represent, I don’t know, tiny elf poop? Waste of chocolate, you guys.

So April 1st was pretty much a day on which I ignored any new relationship announcements on social media. At least it was prior to 4/1/14, a day which lives in infamy, because on that day (four days before our wedding) I found out I might be showing up to get hitched sans robe (translated: without a dress).

Some background: I am not a wedding person. I mean, I like them. I enjoy the celebration of love, free wine, and cake. I can ooh and ah at decorations and fancy programs and string musicians with the best of them. But when it came to planning my wedding, I was all, “Let’s just get married in a field with like ten people!” Bryce, the future-pastor, was all, “Let’s get married in a church and invite every single relative!”

Without exaggeration, every decision we made for the wedding was a split-second what-do-we-like-in-this-moment because the details were too much for us. I had not decided a decade prior that our guests would be sitting in tufted chairs with cream tulle tied into a bow while they supped upon poached salmon and Gruyère cheese puffs. We literally forgot that we needed tablecloths until two days before. I told the florist “I like flowers” and let her do her thing because she is the professional. I, on the other hand, can identify maybe three flowers, and those flowers are roses, carnations, and lilies. And although I am not a florist, something tells me those don’t go together.

This is all to say that it shouldn’t surprise anyone that I did not spend the year of my engagement scouring the earth for the perfect wedding dress. In fact, the only thing I had decided about my wedding prior to actually planning it was that I wanted to wear my mother’s dress (which had also been my grandmother’s).

In addition to holding a lot of sentiment, it was free, and conveniently I was almost exactly the same size as my mother  when she got married, so the alterations were minimal.

The only problem was it had been stored for nearly 30 years, so it smelled preeeeetty musty. We tried everything. I must have read every single article on de-musting old clothes that exists on this here internet. We steamed it. We diffused nice-smelling things. We let the radiant sunshine beat down upon it to absorb all the odor molecules or whatever science-y thing was meant to happen.

Nothing worked. And while I debated calling the florist to swap in whatever the most pungent flowers are, like they did in olden times to cover up the fact that bathing was not a daily activity, or perhaps ask if she could arrange a bouquet of something even more aromatic, like fried chicken, my mom decided to contact the seamstress. She suggested we bring it in to her shop so she could send it to a cleaner.

She assured us that they knew how to appropriately treat old garments with some magical cleaning process consisting of fairy dust, the wishes of the pure-at-heart, and time warping. So we handed it over. We got the dress back the week before the wedding, draped in a near-opaque blue bag. I hung it up in the closet and let it be.

On April Fools’ Day, for reasons which I can only attribute to divine intervention (because–again, no surprise–I hadn’t been a bride who tried on her dress every day) I opened the bag.

The dress looked like the cleaner had hung it up in a closet, set catnip on a shelf above it, and set an army of kittens loose. The lace was shredded. I don’t have any other word for it. The sleeves and bodice were loosely held together from scraps of lace that had evaded those tiny kitten claws, and the dress as a whole was distressed enough to give these jeans a run for their money.

As you may imagine, I started crying and looking at the blue bag to debate if we should just Project Runway it because hey, I needed something blue anyway, right, and it might as well be new and plastic too. My mother came after working a full day and off we went to David’s Bridal.

We get in there and my mom explains what happened, and of course, because a family heirloom has just been destroyed and because I’m stressed and because planning weddings can just really suck, y’all, I start crying. And these ladies, instead of gently suggesting I take my overactive tear ducts elsewhere because there are women experiencing joy in those changing rooms over there, heroically pulled out the stops.

Everything turned out just fine, minus the dress, which was chemically damaged beyond repair. (It turned out not to be kittens after all.) The sales rep working with me, the manager, and the alterations team (who somehow managed to hem the dress I bought with four days to spare even though they were understaffed) have earned my undying appreciation for getting me into something white and fancy for my big day.

In fact, I wish I could bring them some of this bread. It’s not fooling at all. It’s just lightly sweet lemon blueberry bread, dense almost like a pound cake. It is in every way exactly what it seems, and that’s what we need on April 1st. 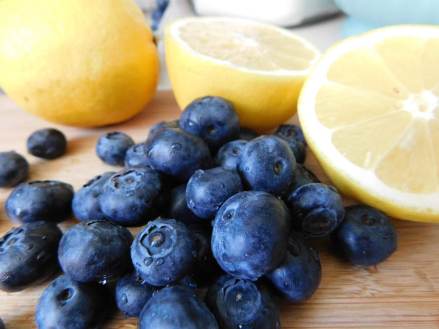 for the glaze:
juice from half a lemon
powdered sugar

Preheat oven to 400 degrees. Grease one loaf pan and set aside.

Zest lemons; set zest aside. Halve and juice the lemons, then strain out the seeds and pulp. Divide the lemon juice. For me, 1/4 cup was about 1 1/2 lemons. Measure out 1/4 cup for the bread and set the rest aside.

In a mixing bowl, whisk together oil, yogurt, and egg until well combined. Whisk in the lemon juice and sugar. All at once, add flour, baking powder, and salt. Mix by hand until just combined.

Toss blueberries with a teaspoon of flour in a separate bowl. This will keep them from sinking to the bottom of the loaf. Gently fold the berries in along with the lemon zest (optional).

The dough will be thick and sticky. Transfer into the greased pan and bake for around 50 minutes or until a toothpick comes out clean. At around the 30 minute mark, tent foil over your loaf to keep it from over-browning.

To prepare the glaze, whisk together remaining lemon juice and powdered sugar until it reaches your desired consistency and flavor. Once the loaf is cool, drizzle the glaze over the top. Cut and serve. 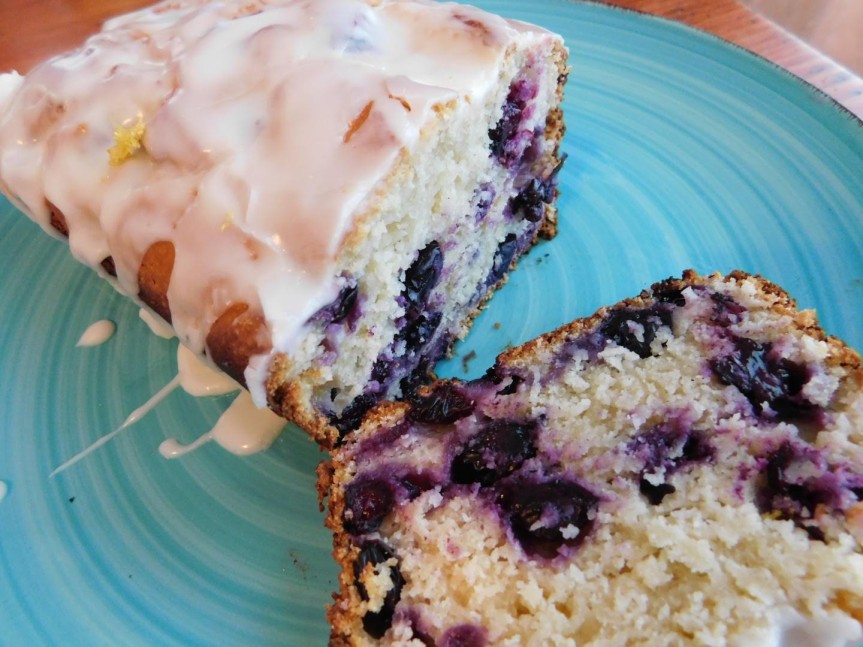 Elsewhere on the Interwebs